“I found out about Young Rock when I was scrolling through my social media one night in bed; this was when Melbourne was in its first hard lockdown,” James Bolton tells us. “I was feeling a little apprehensive about the future of my acting career – I’d invested 13 years of my life into it – and what it would look like after the pandemic.”

The social media post that caught Bolton’s eye was by Dwayne “The Rock” Johnson, whose life story serves as inspiration for the entertaining series, mostly shot on the Gold Coast, and now in its second season.

“A photo caught my eye of someone that’d helped me at my first drama school audition ten years earlier named Uli Latukefu. I always appreciated him calming my nerves that day, and I’d made a point to follow his acting career. I had to rub my eyes and do a triple-take. The post was an announcement of Uli’s casting as a young Dwayne Johnson. After I processed how happy I was for this guy I hadn’t seen in a decade, I thought to myself, ‘I have to get onto this show!’”

Coincidentally, Bolton had recently started training at Relentless School of Pro Wrestling. “I knew that’d give me an edge because I could perform the in-ring physicality. I said to my agent early on, ‘I want you to know that I’m making it my mission to land a role on that show,’ and they made it theirs as well.”

Bolton auditioned for a number of roles, but he was particularly keen on playing a wrestler on the popular show. “These are wrestlers that I grew up watching, so I’m having the time of my life! Then I found out they were looking for a young Jeff Jarrett, who I saw live at Rod Laver Arena when I was 9 years old and, as cliché as it sounds, I had a gut feeling – that’s my role. I sent the audition tape with a bunch of extra footage of me speaking and wrestling like Jeff Jarrett, and tried not to think about it after that. I was actually working on the crew for Shantaram when I received the call that I’d booked the role. I let out a huge scream, cried a little, then went back to work. Charlie Hunnam [who stars in Shantaram] told me how happy he was for me! It was quite bizarre.” 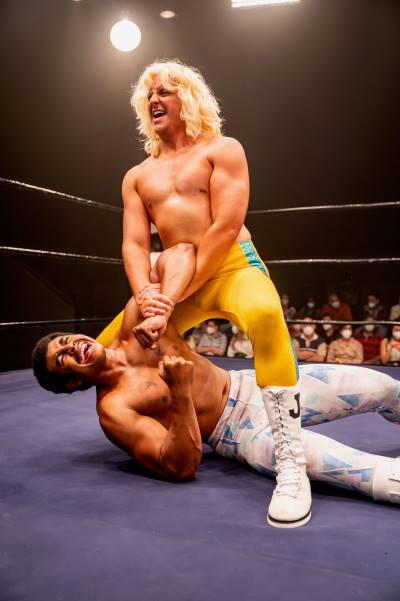 The actor says that landing the role in Young Rock was poetic. “I left the Gold Coast in 2013 to do VCA’s acting course and wound up building a life in Melbourne. I feel almost like a different person to the 21-year-old that left Surfers Paradise. Coming home to shoot Young Rock was like coming full circle in a lot of ways.”

Bolstered by The Rock’s success in both wrestling and acting, Bolton is keen to continue both into the future.

“I didn’t grow up with Disney movies, or DC and Marvel comics. Pro wrestling was my Narnia, Middle-Earth, and Hogwarts. Pro wrestlers were my superheroes,” he says.

“I see wrestling as physical theatre that holds remnants of other art forms. It uses formulas from Commedia dell’Arte, Brecht, soap operas, and spaghetti westerns. It was even the first form of reality TV!

“Taking original characters and applying them to a strict parameter – in a ring with sports-like rules – is perfect for telling compelling stories that unfold in real time, spanning minutes, months, or even years. It has the power to give audiences a cathartic, almost primal experience that’s difficult to find elsewhere. I really do think that pro wrestling, when done well, is the best form of theatre in the world.

“I’ve got a couple of things in the acting pipeline which I’m really excited about,” he finishes when we ask him about what’s in the pipeline. “I’ll be wrestling at the Colac RSL on June 25th for ‘King of Colac’ and July 23rd in Bacchus Marsh Public Hall for ‘Mayhem Pro’.

“I’m building on a long-term wrestling storyline now [as The Unprecedented James Bolton] that I think will be pretty cool… that’s all I’ll say on that!

“All in all, what’s next is to keep working on my craft, keep working for more opportunities, and most importantly, keep loving what I do!