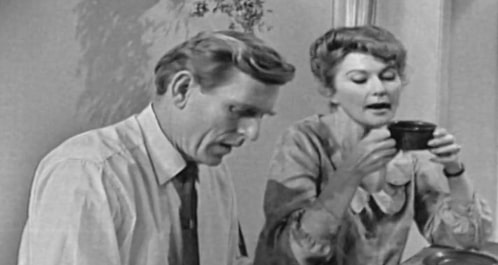 In Tom Stoppard’s stage play The Real Thing, a character has a swipe at theatre about “infidelity among the architect class”. Everyone who’s ever subscribed to a state theatre company knows what Stoppard was getting at: stage dramas about materially wealthy, tertiary-educated middle class types who all have the right political opinions but can’t keep it in their pants. Split Level, although an original for TV, falls firmly within this genre – so firmly, it’s not just about the architect class, it’s about an actual architect.

The plot covers 24 hours in the life of Stephanie (Diana Davidson), a housewife who lives on Sydney’s north shore. Her life seems fairly blessed – she’s got a husband with a job and all his hair, a nice house, three kids, a housekeeper, friends and grandparents to help with the kids, a mother who will loan her money for renovations, and plenty of time to go to the hair salon, smoke cigarettes and hang out with mates. Then she discovers her architect husband (Leonard Teale) is having an affair with an old colleague (Barbie Rogers).

It’s a simple script, one of details and observations rather than heavy conflict, but all grounded in truth. There’s a scene where Stephanie and her fellow north shore housewives hold a play reading group and discuss Chekhov’s Three Sisters – and this piece is a little Chekhov-y, with its mixture of heartbreak and humour, and characters worried about money, love and marriage, status, the one that got away, and lost dreams.

The script was written by Noel Robinson, a female writer (often confused for a man because of her first name) who penned a lot of TV plays for the ABC in the 1960s, mostly adaptations, but this one was an original.  I know very little about Robinson, but she was clearly a skilled writer. Split Level is structurally interesting, jumping around in time with clever segues between scenes.

The play is constructed with great empathy and care. Stephanie starts off as a figure easy to mock, with her constant chatter, smoking, packed schedule of trivial tasks and palming off any household tasks to various staff/in-laws… but by the end of the play, if she hasn’t exactly grown as a person, her world has been shaken to its core, and you do feel for her.

Some scenes are extremely well observed, such as the micro-aggressions Stephanie cops from her mother in law (Winifred Green) who is only interested in her grandson, ignoring her two granddaughters; the banter among the friends (who include Judi Farr and Ruth Cracknell), with its mixture of gossip, bitchiness, banter and kindness; the wordless sympathy shown to Stephanie from her housekeeper (Muriel Brooks) and her husband’s secretary (Joan Morrow), who both clearly know what’s going on, but feel unable to raise the issue. I don’t want to be overly woke about this, but I’m not sure a male writer would have done these as well – or made the decision to tell 95% of the story from Stephanie’s point of view.

The play feels influenced by British TV dramas, with its use of understatement and non-confrontation. However, it is also a very Australian piece – references to Drysdale paintings, and council flats, and the depiction of the world, with its hairdressers, paper folding classes, and financial pressures (real and imagined), feels very authentic. (A first-rate production design job helps.)

The director was Ken Hannam, who was notorious for whingeing about Australian writing, at least later in his career, but praised this script to the skies. According to Bruce Beresford’s diaries, Hannam was a pants man in real life, and he probably related to the subject matter. Also, it’s the sort of script where you can imagine would appeal to a director who enjoyed subtle depictions of relationships.

The cast is fascinating. Apart from Diana Davidson, who does well in a tricky role, it includes the deep-voiced Leonard Teale as the tormented, cheating husband, Ruth Cracknell (who’s typically superb) as a sympathetic friend of Stephanie’s, Judi Farr as a dim friend, Jacki Weaver no less as Stephanie’s eldest child, and Max Phipps no less as a gossipy gay hairdresser. Winifred Greene is a splendidly awful mother-in-law.

Incidentally, a number of early Australian TV plays concerned infidelity among married couples. When the cheater was a man, viewers seemed to rarely blink an eye (Marriage Lines, A Season in Hell, Hot Potato Boys, Flowering Cherry, Don’t Listen Ladies, The Four Poster). When the cheater was a woman, people wrote furious letters to the editor declaring how disgusted they were (The Multi Coloured Umbrella, The Swagman). Split Level received good reviews and then, like all too many Australian TV plays, appears to have been completely forgotten.

I don’t think Split Level is a masterpiece, but it is a very well-realised television play and a tribute to the skill of Noel Robinson, a writer that should be better known. It’s the sort of TV play we should have been making in the fifties, and we could have if given the opportunity, but we got there eventually. It was a pleasure to watch.

The Flawed Landmark: Burst of Summer

Forgotten Australian TV Plays: The Rape of the Belt | FilmInk

Forgotten Australian TV Plays: The Man Who Saw It | FilmInk