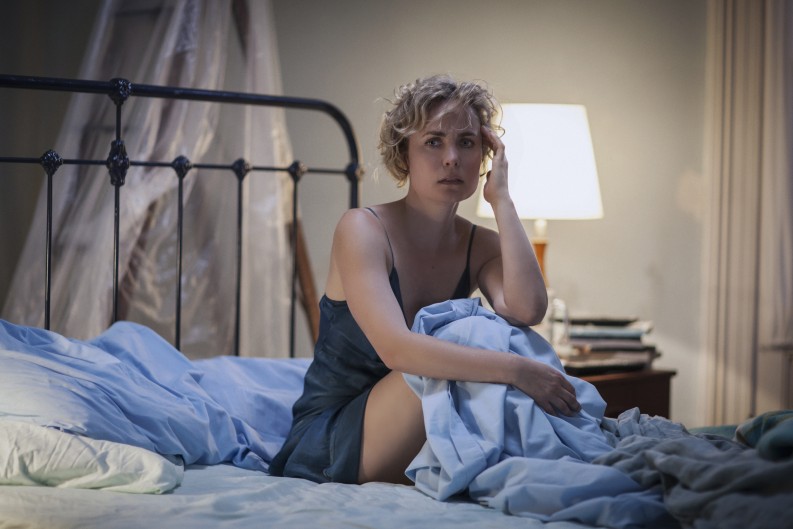 When writer and director Andrew Kotatko began developing Whoever Was Using This Bed, his second Raymond Carver adaptation, he quickly realised that he would need an extraordinarily talented cinematographer to enhance the look of the single-location short film. Enter Geoffrey Simpson, veteran Australian lenser of Green Card, Shine, Oscar and Lucinda and Satellite Boy. Simpson was good enough to answer a few questions ahead of the film’s debut at the St Kilda Film Festival this weekend.

How did you become involved in the project? Were you aware of Andrew’s prior work?

Andrew rang me about 12 months before we actually came to shoot the film in January of 2015. In our initial phone conversation he talked about this script and he mentioned his previous short film, Everything Goes. Later he sent me a link. I was not aware that Andrew had made this film, but certainly knew his name from the many Music Supervisor roles he had performed over the years.

I was aware of Raymond Carver through the films based on his work, Robert Altman’s Short Cuts and Ray Lawrence’s  Jindabyne, inspired by So Much Water So Close to Home, not to mention Paul Kelly’s terrific song! At the end of shooting Gillian Armstrong’s Oscar and Lucinda, Ralph Fiennes gave me a collection of Carver poetry as a gift. So Andrew’s invitation to make something written by Raymond Carver was well received. After our phone conversation I immediately looked Andrew up on IMBD, as you do, and noted his first film at a young age was with Jane Campion, obviously an impressive way to start in the industry. The initial discussion was largely to do with finding the location and the first choices were headed towards apartments that felt like they could be New York or downtown LA. Andrew sent pictures and a floor plan of a Sydney apartment building early on. We discussed pros and cons. Then things went quiet as Andrew worked on casting and I departed to film in China for nine months. I had been back a couple of weeks and Andrew rang and we started talking again. He was now thinking more of a larger house at ground level, so we visited some interesting locations together, including a Harry Seidler house in Killara. Finally we settled on the Paddington terrace seen in the film.

How does the approach differ between a short film and a feature? How do the time and budget constraints affect you?

Not much difference really, obviously a lot more time on a feature… though these days features are getting very tight, particularly in Australia. I got the sense early on that Andrew was investing a lot of his soul in this picture. He was always wonderfully enthusiastic about the script writing process that went on until the starter’s gun! His enthusiasm never diminished during the shoot. It was still present when asking me if I wanted to do this interview. His passion for this work was extraordinary. It rubbed off and I wanted this short film to look like a feature.

I was off doing something at one stage and Andrew started working with storyboard artist Peter Sheehan. I finished that job and started looking at where he was going with Peter. I saw that they were working in 1: 1.85 ratio so suggested we should consider widescreen 2.40 as a format to make the film a little more cinematic and perhaps have more impact at festivals. I also felt there was a lack of wide shots and perhaps too many shots. So we made some changes. We really explored the storyboard process and Andrew really wanted to have things in good shape so we would know exactly what we were going to do on set. I took photographs of Andrew at the locations, so Peter’s terrific drawings really reflected the location and what was in the frame. This was a great help for the art department budget and Alex Holmes our Production Designer. In the bathroom, for example, we knew exactly what the camera would see so he did not have to paint the whole room. I have never really done storyboards in such a detailed way on any film before, though I think it served us well in terms of budget considerations. Things changed on set and we made the compositions better and simplified coverage a bit when we saw how shots worked in the small rooms… as always happens really.

How does working in a single location affect visual choices?

The Paddington house location was a great example of filmmaking efficiency. We reduced company moves being in one location and the few exterior locations were all less than a block away. This was a very busy five-day shoot with day work, interior and exterior and night interiors that required blacking out. Some of the rooms were very small and very careful shot construction was required to allow equipment, crew and actors. In some ways this made things difficult and slow, however I think our storyboarding process meant we were very efficient on set and we used our time well.

The house offered a variety of spaces and its main ‘double room’ – the sitting room-dining room – was great to shoot in due to the size. The variety of looks was largely taken from the script as the action moved from upstairs to downstairs, night and day, small space, large space. The production design really helped the spaces with the packing boxes and we painted walls to help the look. Production Designer Alex Holmes used painter’s plastic to cover woodwork, which worked well with the light, especially at night, so we pushed that look a bit.

What’s up next for you?

I am off to LA next month to grade a small picture, Please Stand By, shot earlier this year. The film stars Dakota Fanning and Toni Collette and is directed by Ben Lewin. Chen Kaige has asked me back to China for another picture later this year, though in this day and age I will believe it when I am on set. 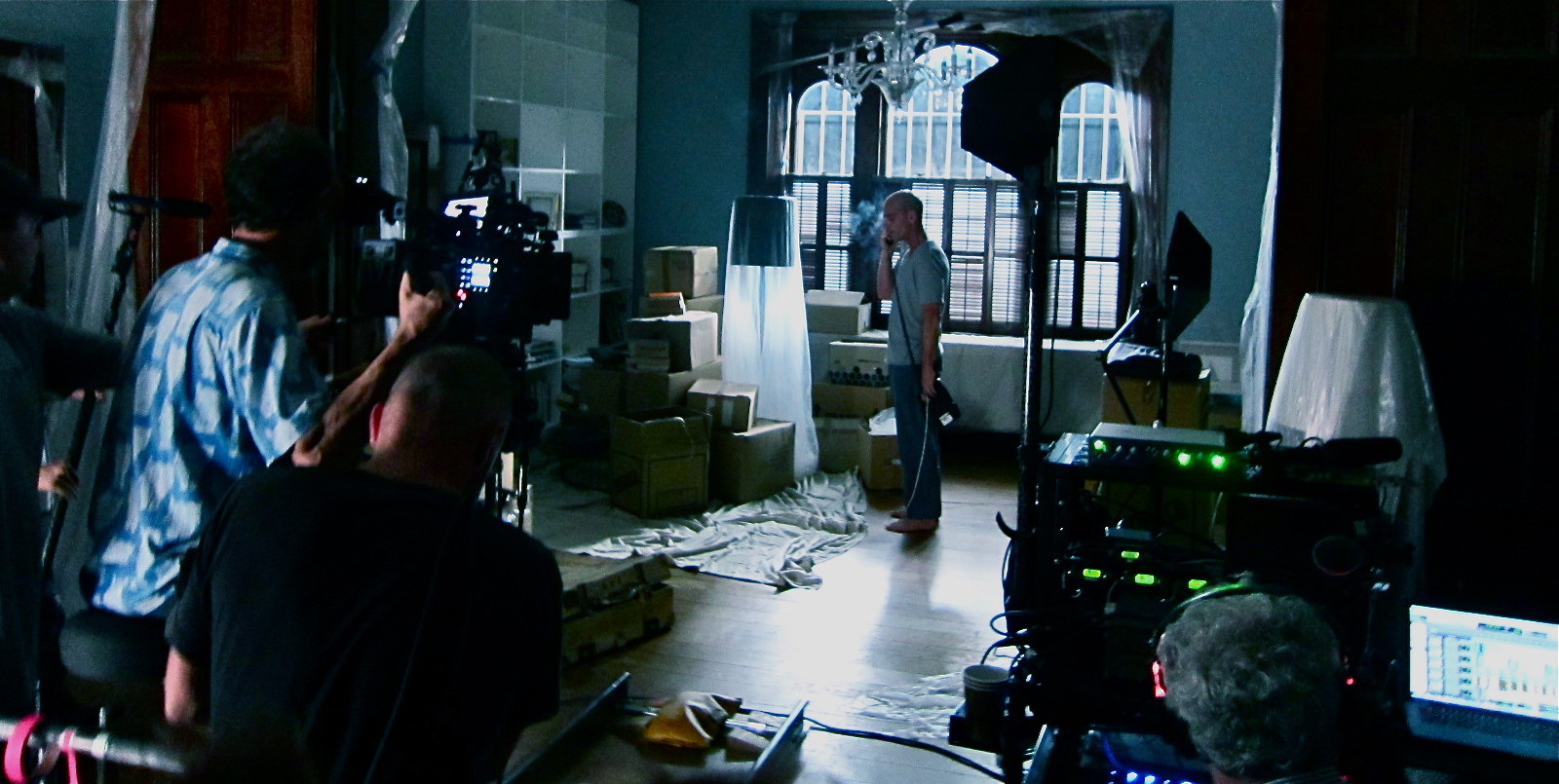 Geoffrey Simpson, ACS photographs Jean-Marc Barr on the set of Whoever Was Using This Bed

Whoever Was Using This Bed is screening at the 33rd St Kilda Film Festival on Saturday, May 22, 7:30pm in Programme 6. Head to the festival site for details. For more info, go to the film’s official site. 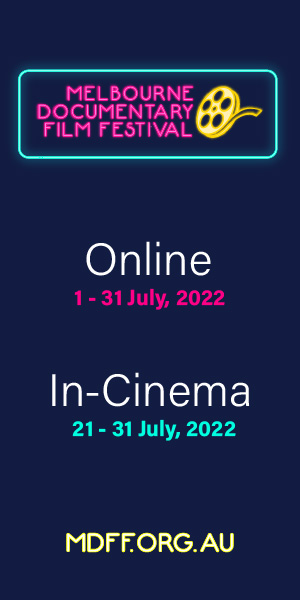