Sydney-based director, Dicky Tanuwidjaya, fell in love with cinema at the tender age of five, and by the time his teenage years swung round, he was already making films. His body of work, including several shorts and a feature, certainly sit comfortably in the action/thriller genre. His latest feature, Adventures Of A Happy Homeless Man, however, sees Tanuwidjaya tackling a lighter kind of storytelling. This doco-style comedy tells the story of Rafael (Felino Dolloso), the titular homeless man, who refuses to let life get him down, whilst interacting with a variety of artistic Sydney-siders.

A scene from Adventures Of A Happy Homeless Man

Where did the idea for Adventures Of A Happy Homeless Man come from? Is Rafael based upon someone you’ve met? “I have had significant ups and downs in my life, so every time that I write a screenplay, there’s always a character that has hit rock bottom. I wanted to make a movie about how someone struggles to bounce back, and finally comes back stronger than ever. The Rafael character is actually based on Felino Dolloso, a childlike person who embraces freedom and is always up to mischief. But he’s actually a romantic at heart. Of course, I added a lot of other things and exaggerated it a little bit.”

Did you two work together on fleshing out the character? “Felino was one of the actors in my first feature film, The Devil’s 6 Commandments. I got to know his jovial personality when we filmed that one. Because we worked together so well, we often hang out and discuss future projects. Felino in real life has characteristics that are similar to Rafael. On the outside, he’s carefree, funny and mischievous (in a harmless way), but on the inside, he’s actually a responsible person. Rafael is a heavily exaggerated version of Felino. Of course, I added a few other things – a passion for music, marital problems, mortgage stress – to shape the character of Rafael.”

Felino Dolloso in Adventures Of A Happy Homeless Man

Ostensibly this is a comedy, but you’re clearly interested in getting to the heart of the characters… “Yes, the top layer is a comedy, but there’s a drama underneath. I hope that the audience can think about how the characters actually relate to themselves or someone they know. Rafael had a marriage breakdown because he spent most of his time and energy working in a corporate job that he disliked in order to pay for his house mortgage. Eventually he found freedom after he lost his job and his home.” 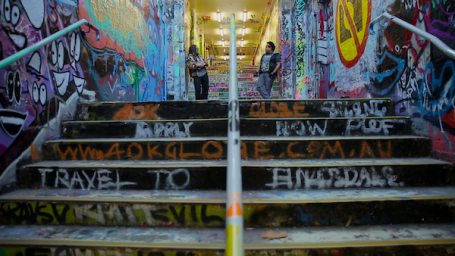 A scene from Adventures Of A Happy Homeless Man

What you made you step away from having violence in your films? “I haven’t completely stepped away from having violence in my future films, but as I grow older, I feel that there are other genres that I can be comfortable telling stories in. When I was in my twenties, my films were heavily focused on style. I was heavily influenced by Guy Ritchie and Edgar Wright back then. As I’m in my thirties now, I put more emphasis on substance, rather than style. I prefer to focus on telling stories that move people. I have become more and more inspired by the works of Spike Jonze, Richard Linklater, and John Carney. It was John Carney’s Begin Again that inspired me to make Adventures Of A Happy Homeless Man.”

Your production company, Motion Arts, is fiercely proud of its independent/minimum budget roots… “Ideally, I would like to make films with higher budgets because more money can also translate to more time, amongst other things. But in order to do so, you need to spend a significant amount of time filling out application forms, preparing tons of documents and paperwork, and trying to get through the gatekeepers by tailoring your vision to a vision that they like in order to get the funding. This route could literally take years. Not to mention that you have to sacrifice your own vision for something that the gatekeepers like. I prefer to be on set and making films!”

Adventures Of A Happy Homeless Man will screen from July 18-21 at Sydney’s Chauvel Cinema. For more information, head to The Chauvel Cinema or the film’s official website.