By some quirk of scheduling, I am in the US, and Diamond Dallas Page is in Australia. When DDP hears about the geographic switcheroo, he laughs deep and long, showing off a set of eye-poppingly white chompers. This is a guy who radiates mega-watt positivity, even through a trans-Pacific skype connection. DDP is down under to host screenings of the documentary, The Resurrection Of Jake The Snake – which depicts the torturous but ultimately uplifting mental and physical rehabilitation of fallen WWE icon, Jake Roberts. “I’ve been in Byron Bay, Melbourne…I’m just loving every minute,” DDP enthuses, as he drains a morning protein shake in his hotel room.

Even if you’re averse to wrestling, that most American of performance arts, you’ll likely have heard of Roberts, who famously carried a snake in a bag to the ring, unleashing the serpent on opponents after braining them with his “finisher”, the DDT. Roberts was never a muscle-bound hulk in the era of Hogan, but he’d become a Hall Of Fame-worthy superstar by the early ‘90s thanks to his stunning command of the microphone, patenting a whispery vocal delivery that could make blood run cold. While wrestling kept him somewhat on the straight and narrow (he was already indulging in promiscuity and drugs in his heyday), by the time that the bright lights were fading, Roberts was falling headlong into alcohol and crack cocaine addiction, arising from a childhood rife with sexual abuse. As the morale of the formerly svelte wrestler shrivelled, his girth ballooned, to the point where he could barely shuffle around his Georgia home without feeling excruciating pain in his limbs. Enter DDP. 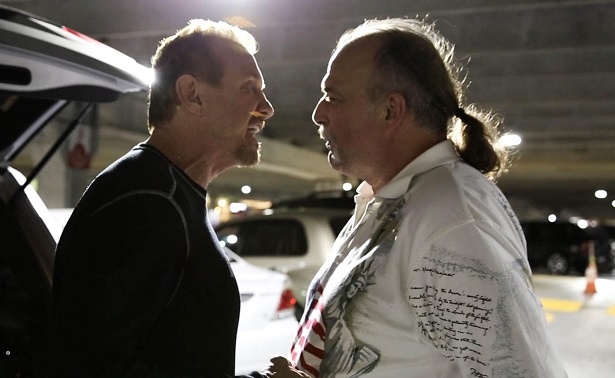 DDP utilises positive thinking, simple accountability, and his trademark brand of power-based DDP Yoga (the film is an authentic advertisement for the product) to rebirth the Snakeman, all covered exhaustively in The Resurrection Of Jake The Snake. The irony of ironies is that DDP and Jake owe their special bond to… alcohol. “I originally met Jake because I ran a nightclub in Florida! He’d come in when he was on the road. And when you’re Jake The Snake, you ain’t ever buying a drink in my joint!” Fortuitously, the pair formed a connection over a few bevvies, and Roberts took Page under his tutelage when he attempted to transition into WCW wrestling in his mid-thirties. “Jake was there for me, so man – I felt like this was the least that I could do. I could see the path forward for him even when he couldn’t.” It’s the fact that DDP doesn’t come across as holier-than-thou that makes him so likeable, and probably why Roberts couldn’t say no, despite his deep malaise. “Oh, I can still drink a few times a week with no hangover at my age!” DDP laughs. “Only the good stuff, like Don Julio tequila. When Jake moved into my pad though, I had to lock all that away. It’s okay to enjoy a drink now and then, but some people shouldn’t take a drink ever. Jake was of the mind-set, ‘I can have three beers. I am a man. I deserve the three beers.’ I had to communicate to him, ‘Yeah, you’re a man – because you have the power to not take that drink.’”

It’s obvious why Roberts was ripe for a make-over, (and given his salty charisma, why he’d be a great doco subject), but why did Page believe that Roberts could actually make it out to the other side of addiction? “I knew the guy underneath all the pain,” he replies. “And I knew that he just needed to change his story. So much of life is about the story that we tell ourselves, and the story that we tell the world. That’s why when I saw Jake doing a TV interview one time, talking about his childhood abuse, I pulled him aside off camera and said, ‘Why are you telling this story again? What about the story that you’re writing now? People love you, they’ve donated money through Indiegogo to fix up your body, and you’re making the mother of all comebacks. What about that story?’”

DDP had his own life-changing epiphany at an Anthony Robbins seminar. Long before recently retired WWE superstar, Daniel Bryan, was screaming, “YES!”, it tweaked with DDP how much Robbins used the word. “I lost track of how many times he said ‘yes!’ It was a testament to the power of positive reinforcement. I realised that life is about the story that you tell yourself. You can’t change your past, but man, you can change your story like that [snaps his fingers].”

Though more positive in tone, The Resurrection Of Jake The Snake shares some of the qualities of Beyond The Mat, a potent 1999 documentary that peeled back the curtain of pro-wrestling and showed the deleterious effects of the biz on figures like Mick “Mankind” Foley. It turns out that that film, which also depicted Roberts’ estranged relationship with his daughter (perhaps the inspiration for The Wrestler?), almost sent Roberts over the edge. “That film almost killed Jake. He hasn’t seen it, but of course he has heard about it. That was the problem when I brought in my boy, Steve Yu, to direct this. Jake kept thinking, ‘Is this another Beyond The Mat? Does this guy just want to fuck me over?’ Filmmakers, of course, want to go for the juiciest bits, I get it. But Jake couldn’t trust Steve totally at first.” To his credit, Yu shows remarkable courage in the face of Roberts’ animosity, only buttoning off his camera when he’s a nanosecond from getting clocked in the face. This friction gives the film a cracking watchability.

Given how poorly the WWE (at the time WWF) came across in Beyond The Mat, what was their take on DDP and Yu’s film? “They say nothing about it!” DDP laughs. “I still see them, of course. I saw them at the Royal Rumble Pay Per View. I just saw them the other day at Wrestlemania 32 in Dallas! I sent the film to the Head Of Talent Relations, who said, ‘I tried to watch the ending three times without crying and I couldn’t.’ But they won’t officially comment. In the end, they wouldn’t sell me the archival footage either. They don’t wanna touch it. They didn’t say that I couldn’t use the footage though.” In truth, the WWE has covered themselves in glory in this whole debacle, by funding multiple post-retirement rehabs for Roberts. “I want them to be seen in a great light; they deserve to, bro! They honestly have done the right thing by Jake. And, man, this movie does nothing but put them over!” [“Put them over” is wrestling parlance for make ‘em look good]. Still, DDP’s wife can’t help but interject from outside our skype frame: “Yeah, but I’m still waiting for them to just say one thing about the movie!”

So, the inevitable question, which I ask with no small amount of trepidation: how is Jake doing now? “Two-and-a-half years sober. His mom just died last week, and this woman had him at 13, so there is a deep connection there. I’ve touched base with him. But he told me, ‘I’m doing okay, man, I’m hanging in there.’” Scott Hall, aka Razor Ramon, who also appears in the film, has fallen off the wagon a few times, but DDP is undeterred. “It happens. And it ain’t about falling off, it’s about keeping on getting up. And despite these glitches, overall, Scott has had a profound change in his life and mentality. It’s obvious to see.”

I profess to a love of the bizarre art form that is wrestling, owing to a childhood indoctrination, but what about folks who just can’t stomach it? Might they miss out on one of the most absorbing human interest stories of the year? DDP chews that over for a moment before answering. “Okay, what you need to do is, you need to find that friend, the one who is mad at you for liking wrestling. Get that person to watch this film. And I guarantee you, I guarantee you, pretty soon you will start to see those tears running down their cheek. If ‘The Rattlesnake’, Stone Cold Steve Austin, can admit to shedding a tear or two, I guarantee you that your friend who doesn’t like wrestling will cry their eyes out!”

The Resurrection Of Jake The Snake will screen at a special one-off event on April 24 at The Astor Theatre, Melbourne. To purchase tickets, head to the website. For more on Diamond Dallas Page, head to his website.