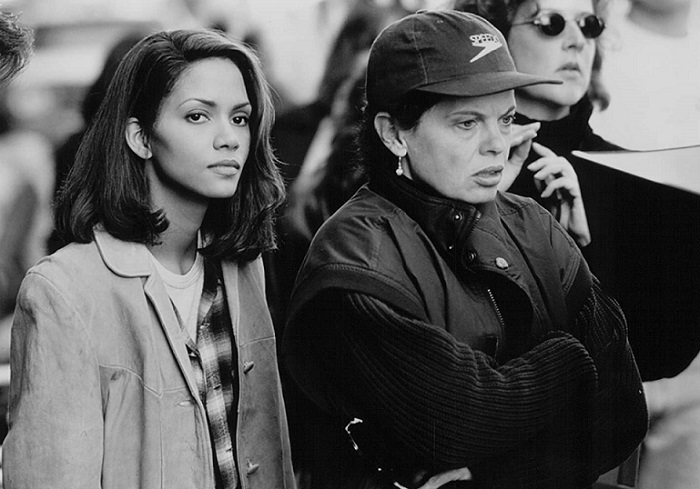 There is a familiar trajectory to the careers of so many unsung female directors: early achievements in other creative fields, followed by a brief period of big screen success, and then a permanent shift to directing and producing episodic television. While the creation of television is certainly a noble pursuit, the director’s sense of personal vision is necessarily placed second to the vision of the show itself. Amy Holden Jones is another name to add to this list. Though now perhaps best known as the creator of the current medical TV series The Resident, Jones had a fresh and potential-filled beginning in the film world.

Raised in Florida and New York, Amy Holden Jones’ earliest creative impulses were toward photography and art history, though she always had an interest in filmmaking. In 1975, Jones directed the short documentary A Weekend Home, which ended up winning The American Film Institute’s National Student Festival on the opinion of three legendary judges: Frederick Wiseman, Eleanor Perry and Martin Scorsese. From there, Jones moved to Boston, where she attempted to kick-start a career as a documentary director. The highly prohibitive cost of shooting on film and finding investors, however, put up a constant roadblock for the promising neophyte. 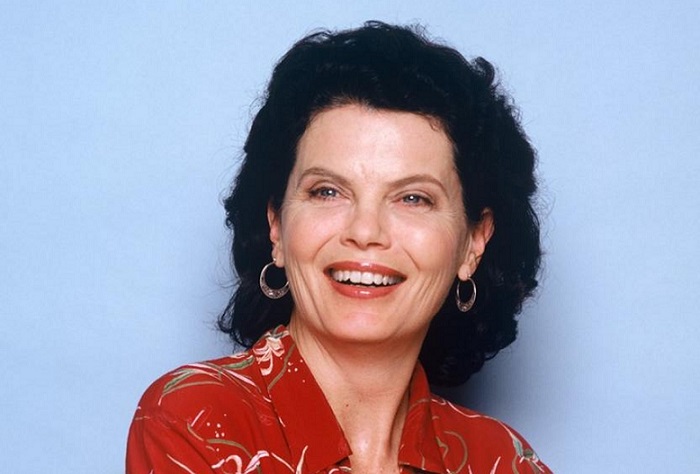 At something of a crossroads, Jones reached out to Martin Scorsese for advice. He remembered and appreciated A Weekend Home, and hired Jones as his assistant on his next film, which just happened to be the 1976 classic Taxi Driver. Jones absorbed as much from the young master as she could, and Scorsese was in turn impressed with her dedication and ingenuity. When legendary exploitation producer Roger Corman – who had helped launch Scorsese’s career, along with those of many, many others – called Scorsese to ask if he knew any talented young film editors, the director recommended Amy Holden Jones, who had watched his entire editorial process at work on Taxi Driver.

Roger Corman then employed Jones to edit Allan Arkush and Joe Dante’s wonderfully inventive 1976 comedy Hollywood Boulevard. After this, she edited Scorsese’s 55-minute 1978 doco American Boy: A Profile Of Stephen Prince, and then cut the 1978 youth car flick Corvette Summer, toplined by Star Wars’ Mark Hamill and Annie Potts. The film was edited at Lucasfilm, which meant that two very important people of the 1970s saw Jones’ work. “George Lucas and Steven Spielberg saw all my cuts,” Jones told The Hollywood Reporter in 2018. “And after that I was on the road to becoming a big editor. But then I picked the wrong movie…I picked a Hal Ashby picture, Second-Hand Hearts, which was the only really unreleasable picture he ever did. [It finally came out in 1980] I was on that for a year and a half and learned every trick in the book of editing from Hal, who was an editing genius. But I knew then I couldn’t stand being an editor, because you could make it better, but it wasn’t yours.” 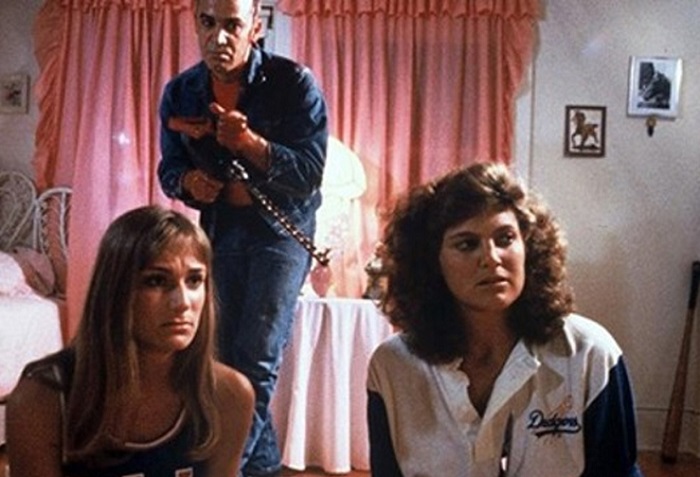 A scene from The Slumber Party Massacre. Turn around, girls!

Despite the failure of Second-Hand Hearts, Jones was next engaged by Steven Spielberg to edit his next film, E.T: The Extra Terrestrial. Constant delays on the film caused by the over-schedule Spielberg-produced Poltergeist, however, pushed Jones back toward her urge to direct. She went to Roger Corman, who was always ready to back an untried talent. As a test project, the producer handed Jones an unproduced script called Don’t Open The Door by noted feminist writer and activist Rita Mae Brown. With a four-person crew, Jones shot the script’s prologue, and duly convinced Corman that she had the talent to direct a feature film. The producer invited Jones to finish the film, but at the same time, E.T: The Extra Terrestrial was set to go into production. Forced to choose between making her feature directorial debut and continuing the upward sweep of her editing career, Jones went for the former. “I made the very crazy decision of walking away from E.T. and doing [what would become] The Slumber Party Massacre, which I have actually never regretted,” Jones told The Hollywood Reporter.

While many, many more women are now working successfully in the horror genre, in the early 1980s, it was practically unheard of. Though Rita Mae Brown had written her script as a parody of the slasher horror genre, the film’s producers wanted it repurposed as a straight-up kill flick, but Jones retained much of the screenplay’s subversive humour. Though the plot is about as generic as it gets – high school girls are stalked by a psycho armed with a massive power drill – there is a lot bubbling beneath the surface of The Slumber Party Massacre, and it remains a classic of the genre, even inspiring two Jones-less sequels, both of which were also interestingly written and directed by women – something of an unmarked watershed in horror movie history.

Jamie Lee Curtis in a scene from Love Letters.

Jones stuck with Corman for her next film, 1983’s Love Letters. An excellent, now almost completely forgotten curio, the drama (also penned by Jones) stars Jamie Lee Curtis as Anna, a young woman sent down a darkly romantic path when she discovers a collection of love letters revealing that her mother was engaged in a long term affair. Inspired by her mother, Anna embarks on a no-strings relationship with a married photographer (James Keach) that ends up sparking a major life shift. A strong drama from the female perspective with a terrific performance from Jamie Lee Curtis, Love Letters is well worthy of reconsideration today, though it remains completely discarded. “Basically, it was designed to be a movie about what happens to the woman outside of the marriage, who is usually, in fiction, painted as a terrible villain and often is kind of a victim who gets left in the end,” Jones has said of the winningly unconventional drama.

For her next feature, Jones planned to direct the youth drama Mystic Pizza from her own script, but the project ended up in development hell courtesy of producer Samuel Goldwyn Jr., who eventually had it rewritten and then passed it onto Donald Petrie to direct. Disheartened, Jones eventually ended up rewriting and directing another project, the flippant 1987 comedy Maid To Order, starring Ally Sheedy as a spoilt rich girl who gets turned into a maid by her, um, fairy godmother. Despite making a few points about class in America, the film is certainly no classic and was long ago relegated to the great pile of VHS tapes in the sky. 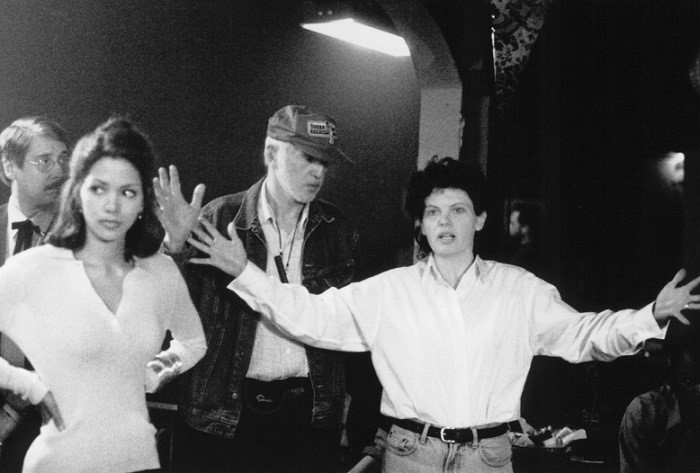 Amy Holden Jones on the set of The Rich Man’s Wife with Halle Berry.

After Maid To Order, Jones pivoted to find great success as a screenwriter, penning huge hits like 1992’s doggie comedy Beethoven (a co-write with John Hughes) and 1993’s infamous conversation starter Indecent Proposal, along with 1994’s The Getaway and 1997’s The Relic. Jones directed her final big screen feature with 1996’s underrated thriller The Rich Man’s Wife, which boasts a knot of fascinating plot twists, a solid performance from Halle Berry (who would later publicly disparage the film) and a rare and most welcome leading turn from the great Peter Greene (best known as Zed in Pulp Fiction). Though a tight genre film, The Rich Man’s Wife received mixed reviews, and ironically pushed Jones toward a successful career on television.

In 2014, Jones created the highly unconventional TV series Black Box, starring the excellent Kelly Reilly (Yellowstone, True Detective, Britannia) as a gifted neuroscientist with a closet full of skeletons and serious mental health issues. “The pilot was originally written six years ago,” Jones said in a Reddit interview from 2014. “An original idea of mine. This was a successful pitch. I sold it to a big cable network in the room, which means they said yes before we even walked out. That’s the best outcome. It was a great home for the show, with a great producer/director. But when the pilot came in, the network had decided to become male driven and although they loved it, they passed because it had a female lead. It took three years to revert back to me. In that time, the script was a calling card and many people liked it. It got me work.”

Though Black Box had a small legion of dedicated fans, the show only lasted one season. Jones bounced back, however, with her next project. The medical drama, The Resident, which is about to debut its fifth season, has been a quiet triumph for Amy Holden Jones, who certainly boasts one of the most interesting careers of any woman currently working in the television field. While now a strong force on the small screen, it’s difficult not to ponder the type of feature films that Amy Holden Jones could have made if she’d been offered the kind of support and backing that her abundant talent and originality deserved. 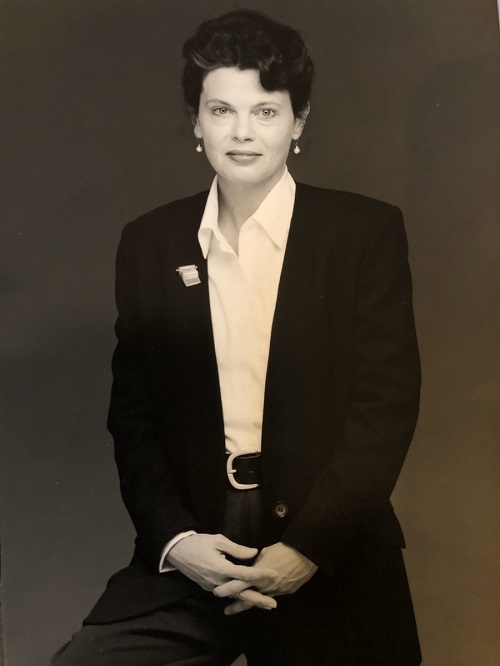